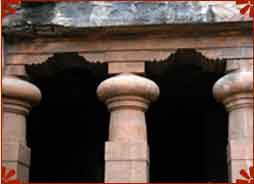 Rock cut architectures are also found in the countries like Egypt, Assyria, Persia and Greece, but not so wide as the kinds of Maharashtra's caves. It is different as it is more of sculpture type than architecture. In this type, the visualized final product is carved from a huge rock. These masons are not that concerned with spans, forces, beams, columns, and all the other architectural features. But these caves serve the basic human needs such as a space for pray and worship or a crypt to serve as a final resting place. Elephanta and Ellora are best examples of cave architectures.

The famous 6th century shrine of Shiva Mahadeva at Elephanta was made by cutting a huge giant rock that gathered over half a million cubic feet of rock. Kailash Temple at Ellora is another marvelous work of human rock cut art. It was not made by carving down into the face of a cliff and creating underground halls, but by setting aside all convention and created a full temple, identical in every detail to a structural built-up by carving vertically down into the living rock. The plan of Kailash Temple is fully equal in area to the Parthenon at Athens.