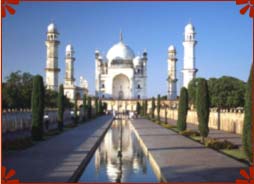 This city is named after Mughal Emperor Aurangazeb. It was called Fatehpur before it took its present name. This city is gateway to the World Heritage Sites of Ajanta and Ellora caves. Developed as a modern city, Aurangabad provides all comforts and modern facilities. There are several luxury budget and star hotels, which caters the tourists of the city.

Siteseeings at Aurangabad Caves, Bibi Ka Maqbara, Himroo Factory and Panchakki are always worth to be organized. Daulatabad, Khuldabad Anwa Temple, Pitalkhora Caves, Lonar Crater and Paithan can also be organized as excursions. Sunheri Mahal Museum, University Museum and Chhatrapati Shivaji Museum are three the museums in the city, housing art treasures of the region.

Aurangabad Excursions
This city is named after Mughal Emperor Aurangazeb. It was called Fatehpur before it took its present name. This city is gateway to the World Heritage Sites of Ajanta and Ellora caves. Developed as a modern city

Aurangabad Entertainment
Aurangabad has number of art galleries; where one can hang out at the evenings and have a look at the exhibitions going on there. Aurangabad Art Emporium and Madilgekar Art Studio are some of the important art galleries

Aurangabad Fair & Festivals
Ajanta and Ellora Festivals: It is the festival of classical dance and music under the backdrops of the Ellora Caves. The festival usually falls in March. The festival showcases best talents from across India. Maharashtra government organizes

Aurangabad History
The name is derived from the Mughal ruler, Aurangazeb. Its ancient history dates back up to the eras of Buddhism, but the modern history of Aurangabad is traced back to 1610. The Buddhist caves in Aurangabad and Ellora are the clear

How to Reach Aurangabad
Aurangabad airport is directly air-linked to Mumbai, Delhi, Jaipur and Udaipur. The airport is conveniently located at a distance of around 10 km east of the town. Aurangabad is known to be the gateway to the region, as most of the visitors who are

Aurangabad Restaurants
There are different ranges of hotels in Aurangabad. One can stay at the government tourist lodge as well as private budget and star hotels. Hotel Taj Residency, Rama International and Hotel Quality Inn Vedant are some of the popular hotels in the city.

Aurangabad Travel Tips
There are several government and local buses in Aurangabad for traveling to Ajanta and Ellora Caves. Private auto rickshaws are the easiest way to travel for local transport. But one can also hire cars and local taxis to travel within the city and

Shopping in Aurangabad
Aurangabad is rich in its culture and heritage as well as its art and crafts. Whenever we talk of shopping in Aurangabad, himroo shawls, mashroo and kimkhab weaves click on one's mind. We can't also forget the well-known fine paithani silk