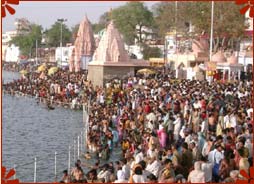 Having many temples and pilgrimage sites, Nashik is known to be a holy city for Hindus in India. Nashik has always been the centre of commerce and trade in India since historical past. Many historic events of the Indian freedom struggle too had been occurred in this place. Ramkund, Muktidham Temple, Coin Museum and Pandavleni Caves are some of the important tourist sites of Nashik.

Nashik is developing as a lively city with a blend of the ancient and the modern touches. The city has numerous forts, temples, historic sites as well as a home for industries. Nashik is also popular for fruit and vegetable productions. Grapes, strawberries and onions are amongst the highest in the country.

Reaching Nashik too is so easy as the Nashik railway station is one of the major stations of the Central Railway. Nashik is 220 km away from Pune. Nearest airport is Mumbai or Pune with a distance of 175 km.

Nashik Excursions
Shirdi, a small village in Kopargam Taluk, in Ahmadnagar, Maharashtra is regarded to be an important pilgrimage place in India as sage Sai Baba lived here till his death. It is about 285 km, which is

Nashik Tourist Attractions
Chitrarao Khatarkar built Ramkund in 1696. This holy tank is 27 m by 12 m in area. It is believed that Rama and Sita used to bath in this tank during their exile. People bring ashes of their deceased relatives and immerse it in this holy tank.

Nashik Entertainment
There are number of movie theatres in Nashik. Here, one can enjoy Hollywood, Bollywood and Marathi films. Marathi theatre is known to be one of the oldest and well established of regional theatres in India.

Nashik Fair & Festivals
This festival is celebrated by giving tilguls and specially made sweet ladoos to each other and even if possible by flying kites. Makar Sankranti generally falls in the month of January. In typical Marathi the saying goes tilgul gya ani gaud bola (take this tilgul and be sweet and kind to each other).

Nashik History
Nashik was included also under Ashok's mighty empire. Later, Nashik district became very prosperous during the era of the Satavahana as it lay on the trade route to Broach (Gujarat). During Mughal period, the city was named as Gulshanabad appreciating its beauty.

How to Reach Nashik
Nearest airport is Mumbai or Pune with a distance of 175 km. Nashik railway station is one of the major stations of the Central Railway. There are a number of trains that connect Nashik to other cities and towns.

Nashik Accommodation
As a pilgrimage holy city, Nashik is not lacked with visitors. So, one can find good ranges of hotels here as well. A range of accommodation is available from the upper end to small local dharamshalas (guest houses) in Nashik.

Nashik Travel Tips
Tourist can comfortably use taxis, tourist cars, auto-rickshaws and vans, which are ideal for local transport.

Nashik Shopping
Nashik is known to be a religious city. Kumb Mela is organized here for every three years in the city. Little brass statues and beaded necklaces are available everywhere. Nashik is popular for its jewellery as well. Adgaonkar Bandhu, Adgaonkar Saraf,