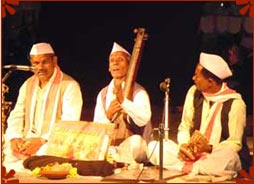 Lavani and Povada are the most popular folk songs that entertain the village-folks in Maharashtra. Bhaleri, a folk-song is sung to cheer the farmers working in the field. They also sing special songs during the harvesting time. Village women of Maharashtra sing a folk song called owi at dawn describing maika, mother's home and sasural, husband's home. Suvasinis sing folk songs at the halad and ghana ceremonies in a marriage. Palane is a lullaby in Maharashtra to put a child to sleep. Artya is the folk song that appeases the wrath of deities to protect from diseases like smallpox, plague etc.