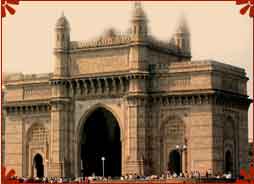 Gateway of India
Gateway of India is regarded to be the starting point for most tourists who want to travel around the Mumbai city. This 26m-high structure has four turrets and intricate latticework carved into the yellow basalt stone. Mumbaites, as well as the foreign tourists come down to this place in the evening and take a cool rest from day's exhausting work schedules.

Marine Drive
Marine Drive is the place where Mumbaites hang out to cool down a while from the steamy hurried and busied life. As street lamps orderly line up on the edge of the beach, it is also known as called Queen's Necklace. Several Hindu religious ceremonies are taking place at Chowpatty like annual thread-tying ceremony, nariel-purnima and Ganesh Chaturthi immersions. Stalls on the beach, selling Bhelpuri, Kulfi and Paan make the chowpatty zesty. 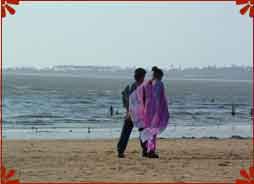 Juhu Beach
Juhu is one of the most popular and posh beaches of India. This fizzing beach on the shores of Arabian Sea is the place where one can find the bungalows of Bollywood stars. Tourists can enjoy horse and donkey rides, dancing monkeys, acrobats, cricket matches, toy sellers etc. here.

Essel World
Essel World offers over 40 exciting rides, games, and attractions. The Water Kingdom is said to be the largest of its kind in Asia. It is a perfect destination for a one-day holiday.

Jehangir Art Gallery
There is huge rush of artistes in this gallery to show one's works. Many of the artistes have to wait a couple of years to exhibit their works in this gallery. The building of the galler 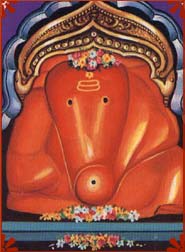 y is an enormous beautiful mansion. Jehangir Art Gallery is one of the Mumbai's well-known art galleries.

Siddhivinayak Temple
The temple has a Kalash, which is a pointed dome of 12 feet high Gabhara (sanctum sanctorum) weighing 1500 kg and plated in gold. So, it facilitates the 'Darshan' of Sri Siddhivinayak from either the area surrounding the Gabhara or the stage (Sabha Mandap) constructed to conduct pujas and festivities. The temple dates back to 18th Century. Vinayak is considered to be one of the Ashta Vinayak shrines of Maharashtra, celebrating eight instances of legends related to Ganesha.

Bollywood
Next to Hollywood, Mumbai is world's largest production centre for films. The Film City: 'Bollywood', as it is called, produces the second most number of films in the world every year.