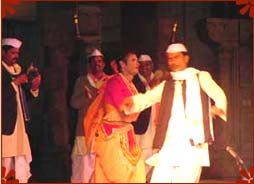 The word tamasha in Persian language means fun and entertainment. The tamasha dance form has been believed to be derived from the ancient form of Sanskrit drama - the 'Prahsana' and the 'Bhana'. Modern Tamasha troupes are of two sections - Song-dance troupe and Folk-drama troupe. Kolhati and Mahar communities are associated with Tamasha. The poet singers known as shahirs, composed many narrative and love songs for Tamasha.

Kathak, kavali and ghazal songs reflect to any Tamasha performance. Tamasha is generally started with a devotional song and is followed by the dramatic sequence known as 'Gaulan'. Love songs like lavanis are the spirit of Tamasha and are very much popular. Musical instruments like dholki drum, tuntuni (a single string instrument), manjeera cymbals, daf (a tambourine-like instrument with a single leather surface), halgi (smaller daf), the metal triangle called kad', the lejim (an instrument with a jangling sound), the harmonium and ghunghroos (ankle bells) are used to increase the aestheticism of the dance.