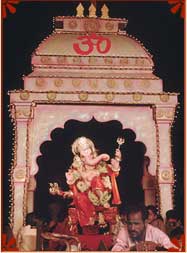 Ganesha festival, also known as 'Ganesh Utsav' is the biggest festival in Sangli and the nearby areas of Maharashtra. During this festival, people first purchase Ganesh idols and take it to temples to offer prayer. These idols are again taken to their homes to worship for 8 to 10 days. Then it is immersed at Krishna River near Irwin Bridge.

Huge Ganesh idols are worshipped at nicely decorated pandals, also known as Dekhavas for 8 to 10 days. These Dekhavas are organized by the Mandals, worked collectively for the entire locality. Various Mandals shouting the slogans of Ganpati Bapa Morya take out huge processions during the first day and the day of immersion of the idols throughout the city. People from the city and nearby towns, districts throng to witness the Ganesh festival celebrations. Huge money in terms of crores is spent on decorations of the pandals.

Ganesh Temple at Sangli is very famous, as it was built from pink sand stone of Rajasthan by the king of the then Sangli state, Patwardhan Raje. The people of Maharashtra have great faith to Lord Ganesh. Every new task begins only after taking the blessings of the Lord. Sangli is well connected by rail and road.