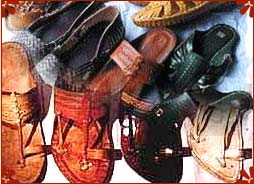 In past days, generally people of wheat and cotton growing areas wear shoes, but were less common in the rice growing areas. Women go bare-footed, but sometimes have sandals in the past days.

Boots and shoes in the European fashion are popular since British days in towns and cities, but their use is still confined to small number of rich persons, pleaders, young merchants etc.

For the use of the common people, sandals and chappals of various patterns are the most common one in the state. Kolhapuri chappals, which are made in Kolhapur district of Maharashtra and its surrounding towns and villages, are famous worldwide.