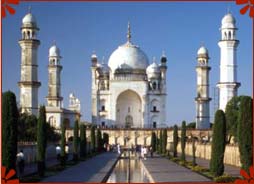 Bibi Ka Maqbara is situated 5 km away from Aurangabad. Aurangazeb's son, Prince Azam Shah built it in 1678 in the memory of his mother Begum Rabia Durani. This mausoleum is a replica of the famous Taj Mahal.

Despite the layout and surrounding of the tomb is very much similar to Taj Mahal, somehow the architecture fails to produce the magic of the Taj. Hence, it is considered to be a poor imitation of the Taj Mahal.

The chief architect of the monument is a Persian called Ustad - Ata - Ullah. The inscription on the walls of the tomb reveals that it cost precisely Rs. 665,283 and 7 Annas to build this monument.

Bibi Ka Maqbara has four towering minarets like Taj Mahal. An octagonal lattice-screen of white marble surrounds the raised plinth supporting Rabia Daurani's grave inside the tomb. The tips of its pillars are made of red stone. The monument becomes so beauty when its reflection falls on the water as soon as the sun's first rays fall on it.

MTDC organizes a fair every October as the Bibi Ka Maqbara festival. Aurangabad is well connected through air, train and road. Accommodation facilities are available at various hotels at Aurangabad.