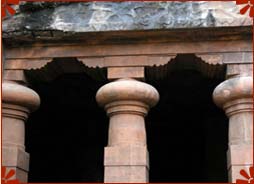 Elephanta caves are in the magnificent Elephanta Island, which is 11 km from Mumbai. It has beautiful carvings, sculptures, and a temple of the Hindu God, Lord Shiva. This UNESCO World Heritage Site has been a commercial, military and religions centre for centuries having traces of early Buddhist culture.

The Elephanta caves date back to 9th - 12th centuries. With the Brahminical resurgence during the reign of Gupta dynasty in 3rd century AD, these great cave dedicated to Lord Shiva exploded into existence at Elephanta. According to legends and historians, great warrior prince of Chalukya dynasty Pulkesin ll raised the shrine to celebrate his victory. Some historians also suggest that the Kalchuri King Krishnaraja built these caves in 6th century AD.

It seems that the same craftsmen and sculptors who had worked on the Kailasa Temple and other adjoining Buddhist caves at Ellora were employed at Elephanta. It is believed that the caves were used as target practice after they constructed a fort and put a flag to ward off pirates.